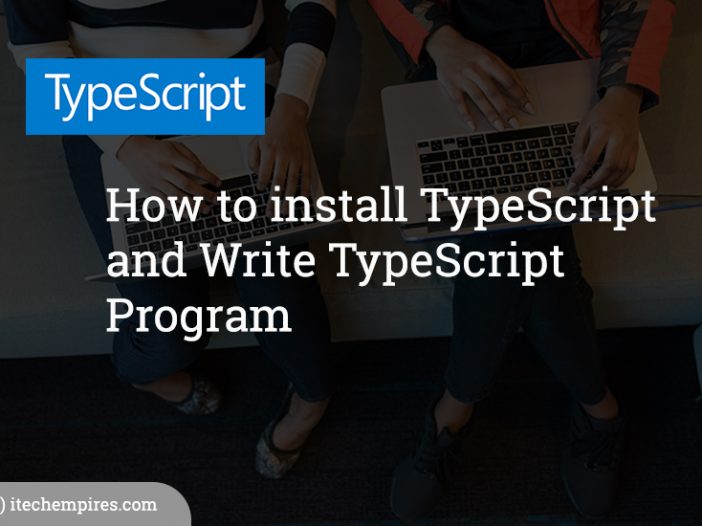 In this tutorial I am going to give you details on you can install typescript and write your first typescript program.

So keep in mind in this tutorial we are not going to work with Angular or React in this section we just going to purely focus on typescript so that you will get more sense of writing typescript.

Read – What is TypeScript, Advantages of Using TypeScript

If you are on Mac you need to add sudo at the front of the above command.

So the above command will install the latest version of typescript on your machine as you can see in my case it is 3.5.3 at time of writing this tutorial.

You can also type following command to checkout current installed version of typescript:

Where tsc stands for TypeScript Compiler

So now I will show you how can write very basic simple TypeScript program and compile it using typescript compiler and run using Node.

Okay so go ahead and create new folder for new typescript program you can call it anything you want and open that folder into your code editor.

So what we are doing here is just defining a very simple function called log_message() that takes a message parameter and then we simply log that message on the console using console.log

Next we have defined global a variable called message and assigned sting to that variable and we simply passing message variable as argument to log_message() and finally calling log_message() function.

So open up terminal and execute following command from your typescript program folder:

So the above command is basically using Typescript compile and compiling that file javascript.

Next if you look at the files into program folder you can see that we have two files main.ts and main.js.

So this Transpulation of Compilation step whenever your building Angular or React app happens under the hood, you don’t have to manually call the TypeScript Compiler

Alright now let’s open and see what exactly our main.js files has:

So it’s exactly the same code that we wrote but now it’s in Javascript file so it’s clear that All Javascript code is also valid TypeScript code.

So we can execute our javascript code using node, so go back to the terminal and execute the following command:

You will see that the “Hello TypeScript” message output on to the terminal.

So to conclude what you learn from this tutorial is that how you can install typescript on your macing, create your typescript programme and compile it to Javascript code.

I know this very basic step but it is important to understand the core concept so that in the future while learning the details features you know have better sense.

Next you can learn on how to declare variable in type script here – How to Declare Variables in TypeScript?

The reason of giving above tutorial recommendation is we have complete tutorial series on learning typescript, that’s why I want you know and learn typescript fundamentals it is going to help you while developing application with Angular or React.